A dream commission from the UK's best selling travel magazine to photograph historic film locations in New York, well you would think so, wouldn't you. All was going well until hurricane Joaquin hit and then life became a little more challenging... Here is how I made the opening image.

My flight didn't land until 2:30pm and I was initially staying right out in the sticks in South Brooklyn but the weather was good, in fact the weather was so hot and humid I thought I’d landed in the tropics.

On assignment, I always feel better when I have a few shots in the can, so dumping my bags, I set out for Brooklyn Heights. It’s a location I know from previous visits to New York with great views over the Manhattan financial district and Brooklyn Bridge.  LP had said they wanted a nice view of the NY skyline for the opening DPS (Double page spread), to be shot in a monochrome/retro movie poster kind of way. So I always intended to shoot from that location, also its near to DUMBO, which was another of the shots I needed, as it's where the poster was shot for 'Once Upon A Time In America'. I intended it as a recci actually but when I got there the cloud formations were very dramatic, a prelude to the Hurricane which hit next day. So, right time, right place. In a way though you make your own luck in this game, right!? I aimed to get as much done as I could while the weather was good, although I had no idea at the time how bad it was going to get in the next day or two. I always think never procrastinate! Get what you can, while the elements are being kind, especially as you only get a short time on shoots like this with a lot of ground to cover!
I had this vague idea of what I wanted but it has to be vague for me, almost like a dream half remembered or an impression. If it's too planned or too fixed there is no room for the magic that can happen between, what I like to think of as, the imagined and the found object. So all that about the retro movie poster was going round in my head and then of course, I was just lucky with the clouds. I like to try and capture a sense of drama, clear blue sky’s are a nightmare for me! Actually in my head I imagined the scene as a mirror image or reflection. I think it would look great shown that way!
My advice to aspiring photographers would be to think about the composition. Think about the rule of thirds and then wether you want to break that rule. Think to yourself, what will enhance this scene, sky or sea or neither. I chose to crop the foreground out in camera as I felt it was distracting & focus on the sky, the Fuji is a great camera but not full frame, so you have to think about the final crop! Choose your scene and compose it to suit your idea. I love this shot because of the way the clouds tail towards the top corner, giving it a real sense of drama, a dynamic element, it kind of creates a diagonal, also it reminded me of native american smoke signals, like you used to get in old westerns. So you have to have your mind open to ideas like that. The sense of drama is also enhanced by the slightly converging verticals. Be aware, focused and ready, the clouds were only like that for a few fleeting seconds!

Posted by Gary Latham Photography at 04:03 No comments:

LOS ANGELES 04/12/2015 - Professional photographer GARY LATHAM of LONDON, UK was presented with the 10th Annual Black and White Spider Awards Nominee title in the categories of portrait & Children of the World at a prestigious Nomination & Winners PhotoShow webcast Saturday, November 21, 2015.
The live online gala was attended by over 10,000 photography fans around the globe who logged on to watch the climax of the industry's most important event for black and white photography.
10th Annual Jury members included captains of the industry from Bonhams, Random House, Aeroplastics Contemporary, Stockholm City Museum, Annenberg Foundation, Leo Burnett, FTM Art Advisory and Fratelli Alinari who honoured Spider Fellows with 505 coveted title awards and 943 nominees in 31 categories.
"It is an incredible achievement to be selected among the best from the 7,686 entries we received this year," said Basil O'Brien, the awards Creative Director. “Gary Latham’s “Monks, Angkor Wat, Cambodia,” and “Chief Terima, Papua New Guinea,” exceptional images entered in the Children of the World & portrait categories & represents black and white photography at its finest, and we're pleased to present him with the title of Nominee." Jury member Diane Ruggie from Velocebella agency added, "The gallery of winners and runners up has true stopping power."
BLACK AND WHITE SPIDER AWARDS is the leading international award honouring excellence in black and white photography. This celebrated event shines a spotlight on the best professional and amateur photographers worldwide and honours the finest images with the highest achievements in black and white photography. www.thespiderawards.com
# # # 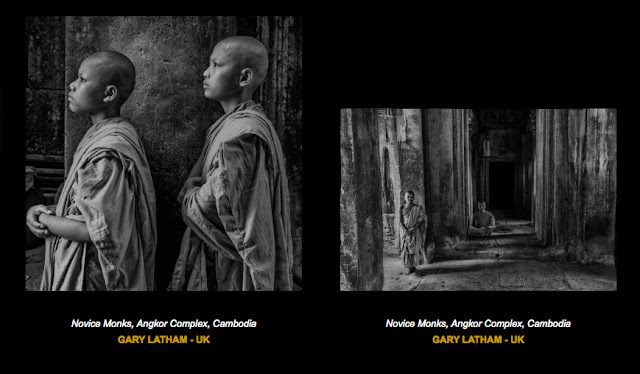 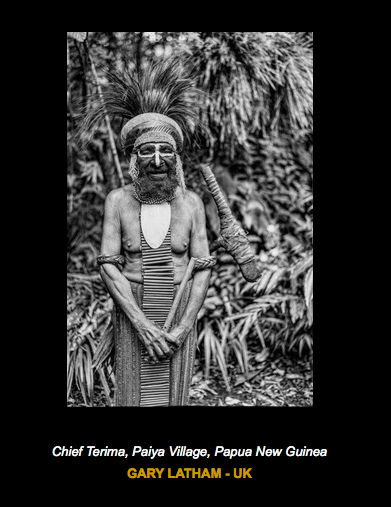 Posted by Gary Latham Photography at 09:16 No comments: